2021 Mirvac Women’s Teams of the Year

The 2021 Mirvac Women’s Teams of the Year have been selected.

The NFNL Teams of the Year are selected based on the following criteria:

The NFNL congratulates all players and coaches who have been selected in each of the three teams.

Please continue below to see the 2021 Mirvac Women’s Teams of the Year.

Audley was selected in the centre, while Thorp was named at full forward.

Their teammate Stacey Cross and Darebin’s Tamara Olcorn were the only players selected in the 2021 Mirvac Division 1 Women’s Team of the Year to also feature in the 2019 team.

Darebin and Lower Plenty also have three representatives in the side, which include best and fairest top-five vote winners Julia Phung and Molly McCormack.

Eltham’s Claudia Williver was named in the on-ball division after finishing inside the top-three of both the best and fairest and Coaches MVP voting.

Greensborough, Eltham, Montmorency, VU Western Spurs and Whittlesea each have two players in the side, while Bundoora, Heidelberg and West Preston-Lakeside are all represented by one player.

Diamond Creek Women’s Colin Wallington was named coach of the team after the Creekers finished the season with a 10-0 record.

All clubs are evenly represented in the 2021 Mirvac Division 2 Women’s Team of the Year.

Diamond Creek Women’s, Hurstbridge, Montmorency and St Mary’s each have four players selected in the team, while Darebin and Wallan both have three representatives.

The midfield includes many of the competition’s standout players, with best and fairest winner Maree Stephenson and Coaches MVP Elyssa Rees named as rover and ruck rover, while Brigid McEntee has been selected in the centre after a top-five finish in both awards.

Rebecca Hayes was chosen at full forward after topping the goal kicking table, with her Hurstbridge teammate Belinda Harris beside her in the forward pocket after finishing runner-up for the best and fairest.

Russell Tilley was selected as coach after Montmorency went through the season unbeaten. 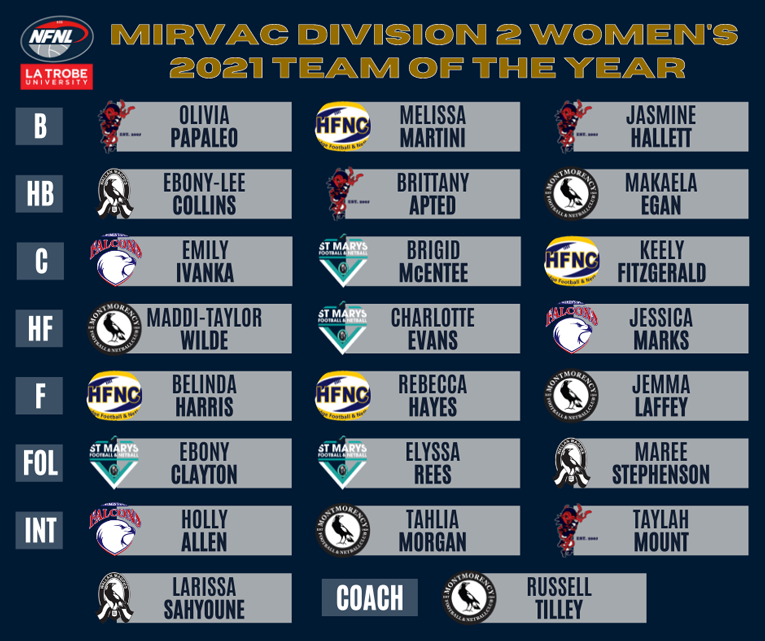 The top-two sides, Banyule and Fitzroy Stars, are extremely well represented in the 2021 Mirvac Division 3 Women’s Team of the Year.

Mernda captain Natalie Todaro was selected as the team’s rover after a dominant campaign which saw her win both the best and fairest and Coaches MVP Award. It was the second time Todaro has claimed Team of the Year honours, after being selected in 2018.

Todaro was one of four Mernda players selected in the team. Laurimar had three players included, VU Western Spurs had two and Reservoir was represented by Jaydah Hope.

Banyule coach Daniel Sheean was selected as coach following the Bears’ top-place finish on the ladder. 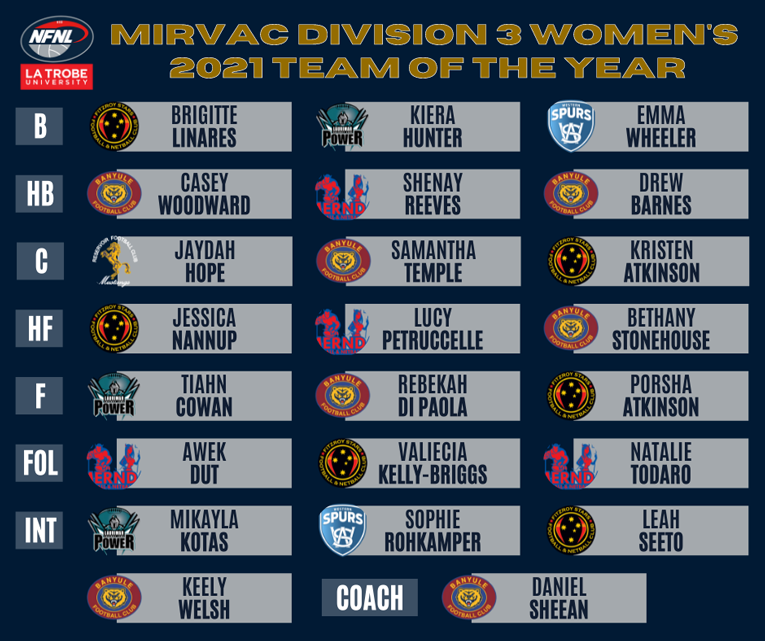