Match reviews from the Section 5 to 8 netball grand finals.

Bundoora 2 challenged Macleod 1 in the Section 5 grand final, winning three of the four quarters, however, a dominant first quarter secured Macleod the win.

Macleod blitzed the Bulls in the first quarter scoring 10 goals to one.

The Kangaroos scored quickly making the most of every opportunity with Section 5’s top goal shooter Daina Peet holding strong and slotting in goal after goal for Macleod.

Bundoora’s passing hurt them early with the side struggling to connect and then scoring only one goal from their six opportunities in the quarter.

Bundoora then ignited in the second quarter outscoring Macleod nine goals to six.

GD Aleigha Walters was strong for Bundoora providing multiple drives through the midcourt and applying tight one-on-one pressure in defence to keep the Kangaroos from finding easy passes into the goal circle.

Bulls’ GA Amy Illic worked herself into the match doing the majority of shooting for Bundoora and cutting fast and hard into the goal circle to break free from her opponent.

Despite Bundoora winning the quarter, Macleod still had moments of brilliance in the second quarter with GK Jessica Bartlett working well.

Six goals ahead at halftime, Macleod continued to remain consistent in the second half despite Bundoora’s impressive effort.

With the first centre pass of the quarter their way, Bundoora were in danger of letting Macleod get the upper hand in the quarter after the Kangaroos turned over a missed goal. However, GD Walters saved the Bulls’ cutting off a pass in the midcourt to send the ball back into the hands of Bundoora GS Nicole Emery for a smooth goal.

Then hands-over pressure from the Bulls in the midcourt caused Macleod to overcook a pass sending it over a third, rewarding Bundoora with another goal.

Despite momentum swinging the way of Bundoora from then onwards, Macleod treasured every possession and continued to hit the scoreboard.

Having trimmed the margin back to five goals at three-quarter time, Bundoora were still in with a chance for the final quarter, however, Macleod only conceded one goal.

The Bulls did everything right in the final quarter with accurate feeds from WA Laura Eaton and C Stacie Hay making it easy for their shooters to find the ring, however, Macleod were just as clean down the other end.

WA Hayley Carter and C Corr provided option after option for the Kangaroos on the circle edge while their shooters played safe and made sure they got as close to the ring as possible before taking their shots to give themselves the best chance of scoring.

With both sides playing almost clinical last quarters, Macleod’s opening quarter won them the match with Bundoora winning the last quarter by a goal.

Speaking after the match Macleod captain Lily McKeown thanked everyone before speaking to her teammates.

“To our girls, it’s taken us three years but we finally did it, let’s celebrate,” McKeown said.

Both sides had a shaky start to the match with nerves evident across the court, however, Heidelberg West settled quicker.

GK Jessica Taylor was able to read the play well, turning over plenty of ball in the first quarter, however, the Hawks struggled to capitalise with nervous shooting and strong rebounds from Kilmore GD Tayce Gallagher sending the ball back the other way.

Kilmore GS Kristy Nunn was impressive early, driving hard to the ball and shooting 100 per cent of her goal attempts in the first quarter.

Heidelberg West having the last centre pass before the end of the quarter went into the second a goal up.

The Hawks came out firing at the start of the second term with their defensive pressure turned up a notch.

The Hawks caused a held ball early in the quarter after coughing up possession a moment earlier which then led GS Hailey Bynon to confidently slot a long bomb.

With Kilmore’s centre next, GD Brooke Wilson then deflected the ball to her teammate C Ebony Capicchiano deep in defence and created another golden opportunity that the Hawks’ shooters took.

Heidelberg West kept up that pressure throughout the rest of the quarter, with Kilmore struggling to penetrate through the Hawks’ defensive set up throughout the court, with every player blocking their opponents’ drives and applying hands over ball pressure.

The third quarter was better for Kilmore, however, they entered it five goals down. Heidelberg West’s defensive pressure was less effective in the third quarter with Kilmore finding ways around their opponents.

In particular, WA Jaqueline Nelson was impressive for Kilmore, zipping free of her opponent across the court and hitting the circle edge smoothly to safely pass into Nunn and GA Rebecca Trefz. Both Nunn and Trefz had strong quarters only missing three goals combined.

Kilmore and Heidelberg West finished the quarter having scored 8 goals each with the Hawks remaining ahead.

In the final quarter, the Hawks led from defence once again with the amount of work being done to turn over the ball, winning them the match as Kilmore unravelled with bad feeds and small mistakes costing them.

Heidelberg West GK Taylor and GD Wilson were instrumental in confusing the space and forcing Kilmore’s feeds to miss their targets in the final quarter while their midcourt then helped to thread the ball from one end to the next seamlessly.

The feeds from WA Tia Takacs and Capicchiano were pinpoint into the shooting circle for the Hawks, with GA Tayla Damiri doing a wealth of work to allow GS Bynon to have room in the circle.

Keeping Kilmore to only three goals for the quarter and scoring 11 themselves, Heidelberg West won the match convincingly by 13 goals. 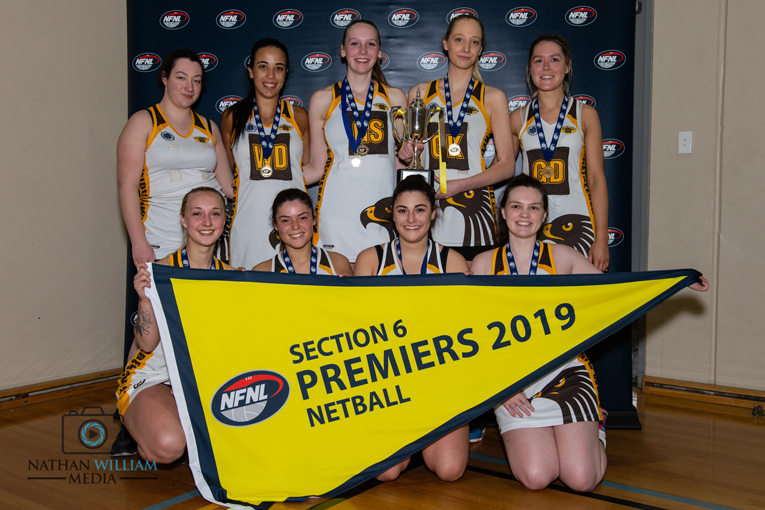 After finishing the season in first place, South Morang continued its strong form during the finals and took home the Section 7 premiership with an eight-goal grand final win over Epping 1.

Epping were determined to prove they could beat South Morang 1 after their loss to the side in the second semi final.

The teams went goal for goal in the opening quarter with both sides able to quickly work the ball down the court and towards goals.

South Morang’s strong defensive outfit had a good eye on the ball for turnovers and started helped their side take with a three-goal lead.

The first quarter quickly came to a close with Epping making a rush down the court for a goal just on the siren, cutting the deficit to two goals at quarter time.

Epping defence worked body on body to force errors on incoming South Morang passes. Their pressure on each pass saw the ball land in their grasp more often this quarter and with more possession they soon tied the game 10-all.

Lows scores for the first half of the game were due to the constant defensive rebounds and forced turnovers made by both teams.

South Morang stole the ball in the final seconds of the half and made a succession of good passes, which led to them landing the ball in the ring right before half time to take a one-goal lead going into the third quarter.

Epping trailed by two goals early in the second half before landing consecutive shots to once again tie the game.

The teams went goal for goal for much of the third quarter, with every small error pounced on.

South Morang gained control of the game as the quarter progressed into its latter stages, and Epping soon began to struggle to land their shots as the building pressure of the final started to get to them.

With the last centre before the break, the Lions tried to make one more goal but unfortunately for them they didn’t get a clean pass in to take the shot.

Behind by four goals at the final break, Epping were the first on the board in the final quarter.

Despite conceding the first goal, the Lions defence ensured their side kept a strong hold of the lead with their rebound and intercepting work at the post making it tough for Epping as they tried to enter the shooting circle.

South Morang made good use of their turnovers and gradually extended their lead as the final quarter played out – finishing with an eight-goal win in a match that felt much closer than the final scoreline indicated.

Watsonia 3 and put in a stellar performance against Mernda 3 to claim the Section 8 netball premiership.

The Saints had a lot to prove after their loss in the second semi to the Demons and they took hold of the game early before a dominant third term helped them comfortably hold on for victory.

Watsonia fought hard defence in the first term and were regularly able to force turnovers, which helped them rack up a five-goal lead during the first quarter.

Watsonia GK Alexia Mitchell and GD Grace Cornell pulled in many intercepts, which stopped the movement of Mernda in attack.

Down by four at quarter time, tight defence under the ring put Mernda in better contention in the second quarter. Their pressure at the post made for many intercepts and closed the margin by the break.

Watsonia had a tough time gaining rebounds at the post as Mernda shooters Ebony Albon and Brianna Prest made themselves comfortable within the scoring circle.

With the game hanging in the balance at half time, Watsonia had a dominant start to the second half.

Most of the Saints’ centre passes led to goals being scored, while their defence grabbed onto turnovers, which had them moving straight towards attack.

Mernda struggled to contain the Saints’ pace around the court and fell 10 goals behind by the time the quarter concluded.

Mernda GD Angel Mann fought bravely for Mernda and was instrumental in the score not blowing out further in the fourth quarter.

However, further up the court Watsonia’s tight marking on their opponents ensured that Mernda was never able to put together chains of goals in succession.

The Saints held strong right throughout the final term and went on for a deserved 11-goal win, with the final score finishing at 26-15

Despite the final score, the best on court medal was awarded to Mernda GD Angel Mann for her excellent work in defence.