Jeff Parkes has been inducted as a Life Member of the Northern Football Netball League.

He became the 44th person to receive honour, which was announced at the 2018 Annual General Meeting held at Heidelberg Golf Club on December 5.

Parkes this year completed his 12th season on the league’s Board of Directors after joining in 2007. He will continue in the role in 2019.

“The reason I’ve stayed around is I’ve enjoyed it,” Parkes told NFNL.org.au.

“I’ve found that it’s rewarding in itself because I’ve seen the league change so much – getting better and more professional.

“I’ve got a very supportive wife (Rona), so that helps, even though she’s not particularly interested in footy. She’s always encouraged me to pursue my own interests.

“Even though the role takes up your time, I’ve found it to be a good balance for work.

“You sort of get locked into a certain way of thinking when you’re at work but coming into the league and discussing football – because I’m passionately interested in football, I’ve always been – so I’ve found this to be really good.”

Parkes has devoted much of his life to the sport and recreation industry. A former senior officer with Banyule Council prior to his recent retirement, he previously spent 15 years with the Department of Sport and Recreation Victoria.

Among his various roles during this period was Sports Development Officer, where he served as the State Government’s representative on the Australian Coaching Council.

He was one of seven members voted on to the inaugural Board of the NFNL, along with Frank Rosbrook (Chairman), John Anderson (Deputy Chairman), Gary Green, Dean Philpots, Tony Topp and Robert Young.

Parkes recalled being called by then AFL Victoria Chairman Bob Tregear, who first raised the notion of joining the board of the newly-formed league following the disbanding of the DVFL.

“(AFL Victoria) been through the Diamond Valley league at that stage and decided they wanted to get a balanced and independent Board,” Parkes said.

“I used to work to work for the Department of Sport and Recreation and I knew Bob. He rang me out of the blue one day and explained what was happening and asked if I’d be interested.

“It came out of the blue and I wasn’t expecting it and I sort of thought about it for a day before I rang him back and said it might be an interesting challenge.

“He wasn’t saying I’d be on the board, he wanted me to be on the AFL Victoria ticket, because the Board still had to be voted on by the clubs. I was one of seven on the ticket.”

Parkes was voted in by the League’s member clubs and has gone on to be the longest-serving director from the inaugural Board. 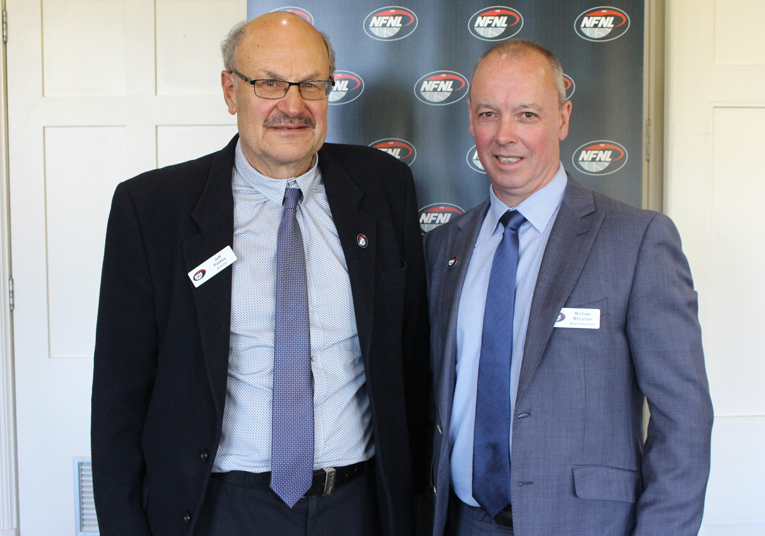 Among his most significant contributions to the NFNL was the development of the competition model used to assist with the successful introduction of a third division in the senior men’s football competition.

He also served as the inaugural Netball Chairman when the league first established its netball competition.

Parkes said continuing to promote football and netball to ethnic groups within the Northern suburbs would be one of his key focus areas going forward.

The Northern Football Netball League congratulates Jeff on his deserved recognition as a Life Member and looks forward to his continued dedication and outstanding service to the league.